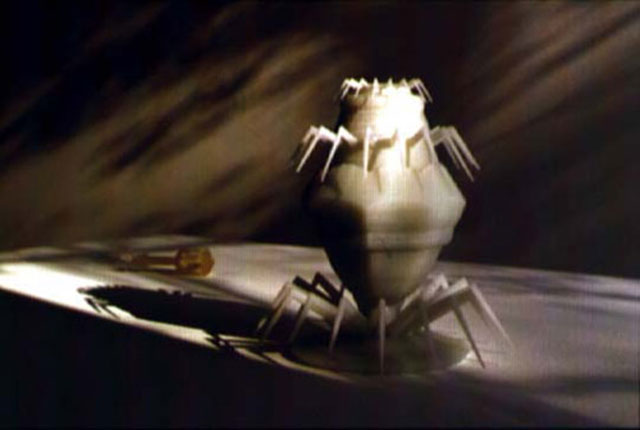 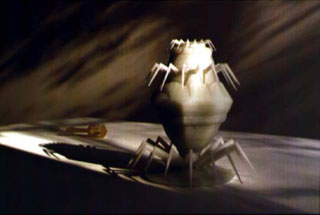 nano-entities was part of an exhibition ‘Virtual Craft’ [craft is dead – long live craft] curated by Stephen Goldate at the Craft Victoria Gallery, Melbourne Australia. 21 May – 13 June 1998 as part of the Next Wave Festival supported by Craft Victoria.

It consisted of 2 Selective Laser Sintered obects, 1 Stereolith object and 2 framed prints around A3 size.

The objects were modelled in Autodessys FormZ and output to STL or SLS systems. The images were rendered in either FormZ Renderzone or Electric Image and composited for print on a dye sublimation printer and then framed. 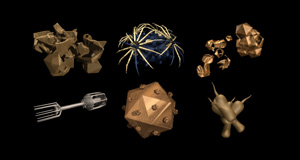 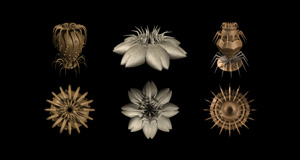 Statement for the exhibition:

These works explore issues about the human condition, knowledge systems and identity.

I am using 3D computer generated form synthesis, sterolithography and digital imaging because these technologies have created the possibility of a more ‘scaleless’ understanding of our bodies and identity. The digital ‘scale’ of macro and micro is a transient scale. Whilst the digitally output objects and images relate to a human scale, the technology masks, but also problematises, their actual scale.

My works represent microscopic forms, “nano-entities”, inspired by many of the recent discoveries that have been made about the body and its processes. These discoveries suggest that the body is far more complex and difficult to define than earlier imagined.

People have used many external metaphors as a reference point for the body. These have generally reflected the scientific, religious or theoretical discoveries of the time. They have used these metaphors to explain the identity of the individual [or group] and their relationships with others. These common metaphors have been seen as a fairly natural focus. And most of these metaphors have incorporated straight forward explanations of ourselves based on ; mechanics, fluidics, magnetics, electrics, computers and other similar physical systems.

Principally two types of metaphor have been used:
– initially an ‘actual’ metaphor with machines [eg. Muybridges human figure in motion], maps [eg. Star charts – mapping territories], diagrams [ eg. blood letting charts – showing body processes] and chemical processes running the system; – then a ‘virtual’ metaphor using such concepts as psychological and genetic states and progress.
Examples of these include the genetic code [a mathematical system of control], the silicon chip [the processing cpu of a computer], the computer network, basic psychological models using behavioural mechanics and the dream state.
However I do not have much faith in the veracity of these metaphors and their knowledge systems. They compress and obscure so many aspects of who we are.

In many ways we have returned to a state of wonder about the body and I think that the mystery has returned to the concept of self. New ways of understanding our identity, our communities and relationships, new concepts of existence and ways of understanding ourselves have resulted from recent scientific and biological research. Can we assume a natural progression to new metaphors that are easily adopted by us or do we need to reassess our position?

I would like to explore metaphors which require some major alterations in the way we organise our identity, possibly in a ‘fluid’ way.

I have always though of myself as bunch of cells getting together for various activities, not as one organism.

I would like to think of myself as a community of beings, thoughts and identities, using such metaphors as; the slime mould, the fungus, the transgendered being, the invaded body, the air space, the smell, the colour, the alien life form which exists at all scales.

I think it is also important to recognise the multiple personalities and multiple states of being, possibly multiple states of gender. Also to look at the concept of Superhumanity – that of cities and communities of people being something more than the sum of it’s parts; new organisms.

Much of my work has centred on the experience of bodily function and malfunction and how this affects our interpretation of who we are and what we are. I am not so much interested in the result of actual bodily functions such as excretion and bleeding, but more the way these affect our personal concept of ourselves. During the course of this research I have personally experienced a number of maladies which brought focus to the process. I suffered numerous problems, mainly I think due in some way to my obsessive use of computers. These led to interesting new ways of understanding what I am and what I could be through medical imaging of my kidneys, head and various other parts of my anatomy. It led to a series of works exploring and trying to filter down my experience to digital 3D animation, image and sound works, and finally 3D physical creations or manifestations.

The process of imaging the body and its functions has always fascinated me and I wanted to extend the imaging process by using digital technologies exploring further ways of visualising the body and the conceptual view of the body. The output of objects utilising stereolithography, is integral to this process of self-discovery. The objects represent a possible body or aspect of a body, but they are also inseparably technological artefacts as well as being beautiful art pieces.

The return of ‘mystery’ to the body [or of wonder] I think leads me suspect that science is now more a religion than it ever was and art has become integral to the practice and exposition of science. Studies into Synaesthesia show that we all have our own ways of seeing ourselves and perceiving our surroundings. We can associate ourselves with a colour or a sound. The real issue then becomes can others recognise this is us?

Stereolithography ‘objects’.
These have been created on a computer using 3D form synthesis software and then output to a STL machine and formed physically. [CAD/CAM]

Stereolithography – a new technology and medium
This innovative process uses photo-setting polymers and lasers to create accurate physical models of new products from computer generated 3D models.
The lasers pass over the layers of fluid and harden it to build the 3D object in layers that are .02 of a millimetre thick. The artist, designer or engineer can have a physical model of a new object in their hands quickly, rather than the weeks required when using traditional prototyping processes.

Selective Laser Sintering – a new technology and medium
Selective Laser Sintering (SLS) systems produce prototypes by using the heat generated by a CO2 laser to fuse powdered material layer upon layer, each layer representing a cross section of the part. Complex shaped components which would take weeks or months to produce using conventional fabrication or tooling techniques can be produced in hours or days in the Sinterstation. Materials used in the SLS process enable the creation of fully functional prototypes, patterns for investment casting, sand cores and tooling inserts. SLS models can be used for functional evaluations, CAD model verification, as aids for toolmakers and for sales/ marketing purposes.