Got this Gibson Acoustic Robert Johnson L-1 about 6 months ago and am loving it. It’s a beautifully made small bodied guitar with a very loud yet subtle and smooth sound. It’s a 12 fret neck but feels a really comfortable size and it makes you want to noodle about on it constantly… actually it makes you feel like most other guitars are too big and too obtrusive. This one feels like an appendage that you need to have permanently attached. 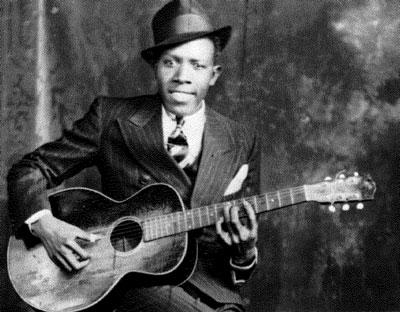 I have always admired Robert Johnson and his style of playing Delta Blues – since i first heard him when looking into the world of blues and guitar. It’s a unique and fascinating sound. And his life story plays out like some sort of ‘made for TV’ mini-series script.

His story is so interesting as it covers a really important formative time of cultural change in the USA.

There is no known film of him playing but there is a good set of recordings: Robert Johnson: The complete recordings

The film made in 1992 – The Search for Robert Johnson – narrated and presented by Guitarist John Hammond is really worth a look and gives a great background to his life and times.

The Hal Leonard Robert Johnson Guitar Signature licks DVD is also useful mainly because looking at transcriptions for his music is mind blowing to try and comprehend. You really need to see someone else attempting to play it to get the feel for what he was doing.

Being a white man trying to play something so uniquely connected with both african-american culture and a very unique individual musician is a little daunting but given another 30 years of guitar playing I might be able to at least do a pale imitation that sounds like I might vaguely know of his music. If not I guess I can at least do some nice noodling of my own on a nice sounding guitar…