Red Epicure is a classic variety of Broad Bean that produces well and is a plant that grows strong and tall. I have found that the plants are usually the biggest of the Broad Beans each year and often are about 1.5 to 2 metres high and are usually standing up by themselves with not much support needed. They are quite quick to come to flower and bearing as well.

These Red Epicure beans really have two main pod phases – the early period when the beans are a nice green and quite small and tasty and able to be eaten direct from the pod without blanching etc – and then the second phase when they colour up and go a deep red but also harden off internally. By the time they are fully red they have moved to a stage where they generally need to be cooked to be enjoyed.

They usually bear large, long pods that often have up to about 6 beans per pod – but can frequently have up to 8 beans per pod, But they also often produce smaller pods randomly over the plant.

It’s a classic heavy bearing and strong growing variety that should be tried in any climate. I usually plant them about late autumn to early winter to give them a good start and then they will produce pods during the early to mid spring period as soon as the weather warms up a bit, and they can flower reliably without being cut down with cold or high wind.

The leaf tips are ok to eat as well although tend to have a  strongish Fava taste unlike some others that have a more pea like flavour.

Here’s some snaps of a small plot of about 20 plants in early spring with pods. 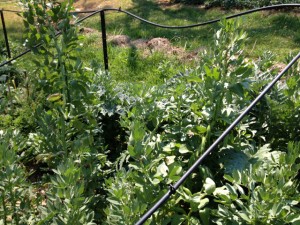