Well it’s mid winter after 18months of soil development and test crop growing at Arcadia and the learning process continues. The range of cropping plants has really expanded and the viable growing space with a good fully organically developed soil has spread substantially.

The quality has mostly been exceptional so far and now I’m working primarily on working out the succession planting rotations and trying to build more reliable and larger output. This part of the farming process is probably the hardest to get working – when you move from fairly random seasonal growing to a consistent turnover year round that can be predicted. It means you have to over plant quite a bit to allow for the vagaries of weather, seed variation and nature in general – i’m looking at YOU marsupials!! – my nemesis those furry bandicoots and large grey kangaroos.

I’m still testing out many crops in ground and on people – but the feed back has been very positive so far. I’m only ever aiming to produce smaller amounts of high quality produce and not so worried about large turnover as I have found this to be counterproductive to the ‘high’ taste quality I’m after, and also just difficult to manage with delivery etc.

And there is so much to possibly grow and eat…

The long term crops are developing well. I have managed to get about 5000 heads of garlic in for this season focussing this year on a healthy range of asiatics, creoles and rocamboles with some interesting variations of purple stripe and soft necks like Red Toch. Although the smaller ones are often the best tasting, this year I have tried to work on more plantings of the larger headed cultivars with more obvious skin colour that people with less garlic knowledge seem to prefer – bigger cloves and lots of vivid skin colour does seem to sell much better. 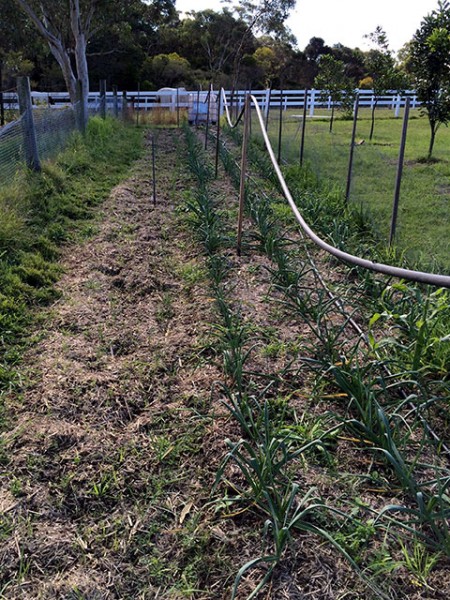 This is one 30x2m plot of Garlic with both a ground and overhead watering pipe system running. In this plot there are 3 lines of Rocambole on the right and 3 lines of slower growing purple stripes on the left. This soil was run with Buckwheat and Lucerne for the 12 months previous.

There is a good starting collection of perennial vegetables like Globe artichokes, Cardoon, Rhubarb, Yacon, Pepino, Asparagus etc.  with many more coming on for planting out this winter.  The artichokes are mostly very productive varieties that include greens and purples. The current growing ones are now developing their second year multi growths from the base and are in mid winter already starting to push out for the early spring buds. 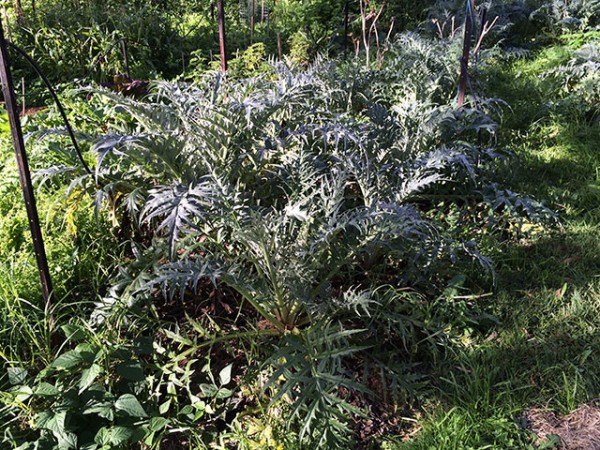 The Cardoons like wise are developing well in this climate and forming good sized succulent stems. 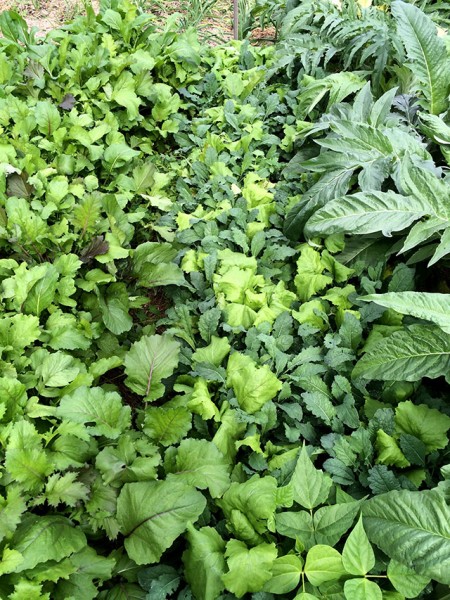 Here’s a snapshot of part of a growing bed with from the left – Choy sum, black kale and turnips with some Cardoons to the right hand side along the edge. The Cardoons need another year of development to get the full multi point growth going and then they can start to be harvested.

Not much room left in this bed for weeds… 🙂 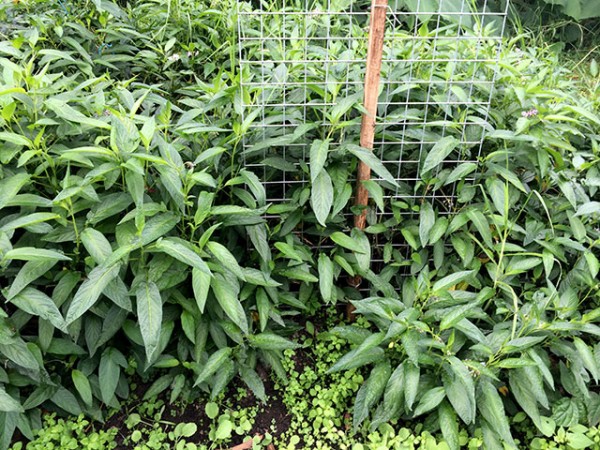 The Pepino plot has been hugely successful with profuse tasty high quality fruit averaging about 15cm in diameter and now i’m working on a better trellis support system to get them up off the ground and away from menacing marsupials. They are not the easiest of plants to train up as they don’t really climb and mostly produce better fruit if the stems are allowed to drop to the ground and put new roots out. But this is a mute point if they get eaten and/or you can’t find them…

The range of perennial herbs has expanded vastly also and there have been some very good results with the more ‘exotic’ herbs now and the plants are getting large enough to crop regularly. This includes plants like Taragon, Tagetes lucida, mints, balms, thyme, oregano, epizote, rose & citrus geranium, lemon grass etc. 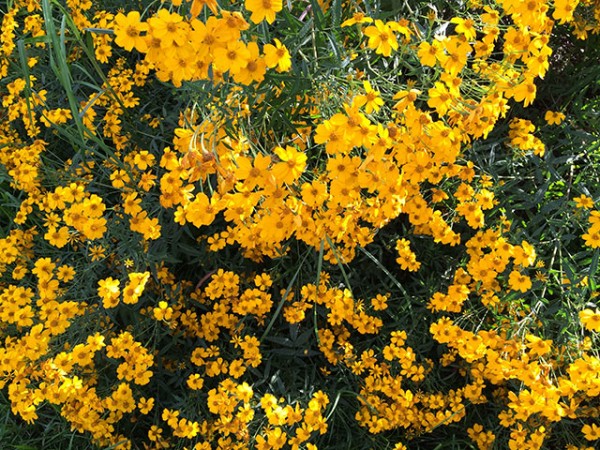 This plant of Tagetes lemonii is about 1.5m high and has been in full flower for about 6 months and smells like passionfruit has been crushed, compressed and then sprayed directly into your face! really amazingly intense!.

Space is still very much at a premium and while waiting for new soil beds to mature and be ready to plant out I have been experimenting with multi crop planting such as growing a combination of asparagus beans, peas and runner beans on the same trellis system. 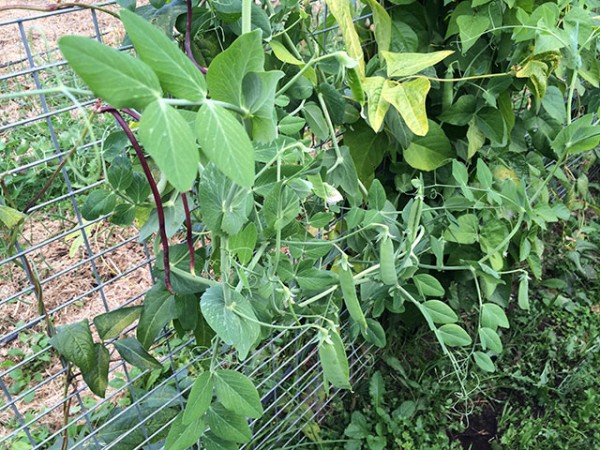 This has been quite good for production so far and the variation has not really made it harder to harvest. A few weeks after this photo snap was taken the trellis has now completely filled in with growth. So I will likely try more of this to get a full range of seasonal vegetables using every nanometre of space available.

Effectively using the trellis and watering systems are essential to getting the most out of the space. Especially now that the local seasonal climate patterns have been worked out – even if the last year has been somewhat uneven and the Sydney region has been effectively in drought.

The beds have been rotated with a bias to growing legumes where possible to begin with to establish a good bio mass and balanced and well buffered soil. The mulch is generally lucerne or organic sugar cane waste for the fine crops with small amounts of balanced manure mixes added.

Generally the open field beds are growing very well and I am really pleased with progress so far. 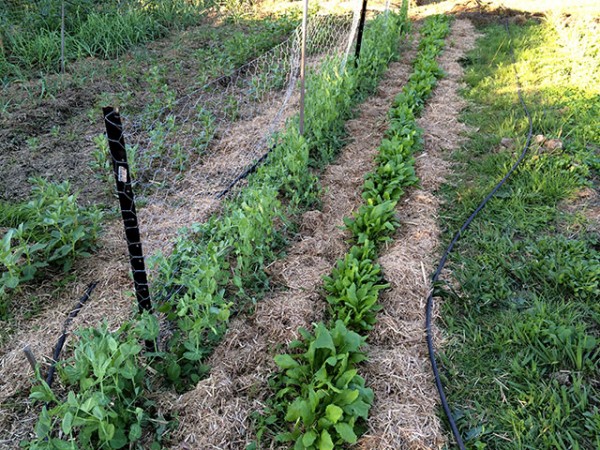 This is a typical winter bed with from the left – garlics, broad beans (Grano White), peas and white turnips. 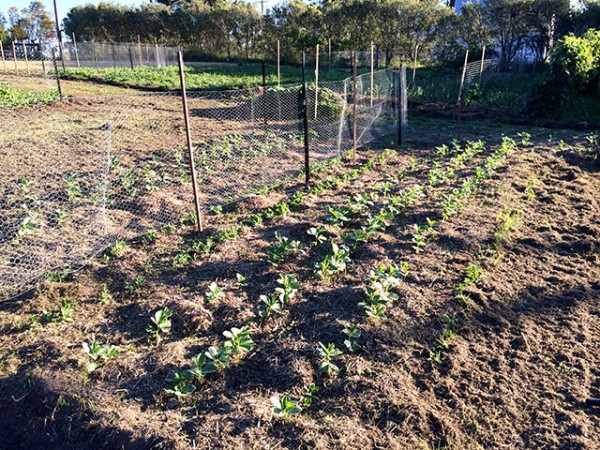 Broad beans and peas. This one has Early Violetta (a large pod beautiful purple bean) on the left side and Egyptian Fuul (a small pod luxurious brown bean) on the right hand side. 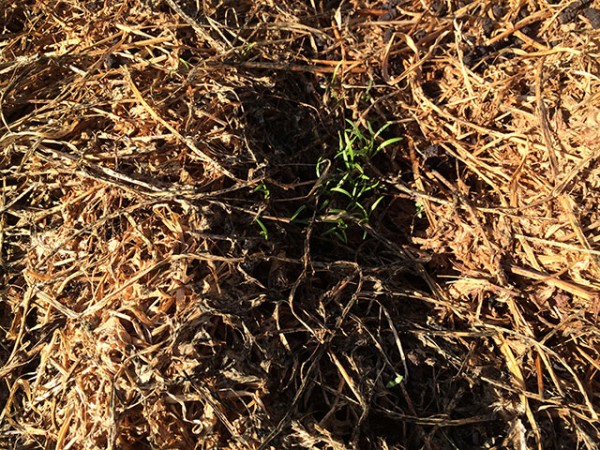 Carrots also get the thick mulch treatment which helps keep the tops from too much sun and wind damage in the open field. This is a row of scarlet nantes coming up. 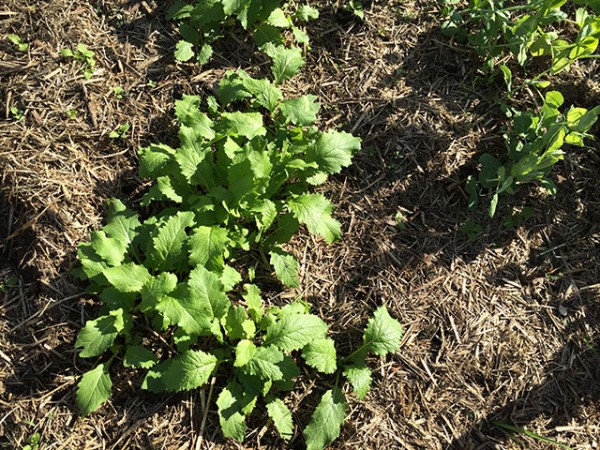 White turnips and Peas. The turnips also really seem to like a good thick mulch around the growing surface.

Preparation has now started for the spring period with tomatoes, cucumbers, chili and other such foods.

Areas that i’m still working on expanding are the various specific variety potato beds and space for the next seasons specialty pumpkins.

The deep root crops are also next on the agenda – I have some Burdock (Takinogawa and Watanabe), Salsify (fiore blue) and Scorzonera in ground but am not really satisfied yet with the depth of the beds for the best quality large roots and easy harvesting.