Yacón – Smallanthus sonchifolius – is another Andes perennial plant that produces succulent tuberous storage roots that can be eaten raw and cooked. It’s common name of Earth/Ground Apple gives you an idea of it’s flavour and texture – very apple like. The skin is simply peeled back and the central core is eaten. It is very similar to Jicama in texture and taste. It was apparently traditionally grown along the edges of growing plots and used as a refreshing snack by Peruvian field labourers in the mountains.

Yacón has a lot of interesting medicinal properties and also has inulin and other indigestible sugars as a main component of it’s flavour which means low calories. The leaf can be made into a tea – but tbh I have not tried doing this yet…

Yacón is related to the daisy/sunflower plant group and grows in a similar way to most of them.

It is quite cold tolerant but likes full sun and responds well to some soil warmth when in growth.

It loves a good loose nutritious soil and plenty of water when in growth.

The plant grows quite large with many stems coming from a rhizome root cluster that spreads over time.

It has two root forms – the core rhizome which tends to be hard and red in colour and from this sprouts the leaf stems and also long thick roots which spread out in to the surrounding soil which form the tubers that you eat. They kind of slowly expand like balloons building up in size often to about the size of a sweet potato. However they can get very big in ideal growing conditions – possibly up to about 50-60cm long and 15-20cm in diameter thick. You cut these off to harvest them. 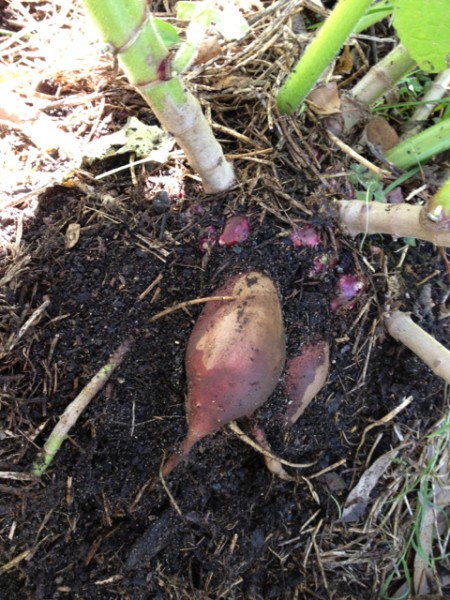 You can see the two root forms here – the core red rhizome and then the large tuberous storage roots forming. You may notice the thick roots continue off into the surrounding soil. These leaf growth stems are about 1-2cm thick.

However they are there for a reason – to provide energy for the following growth season. So if you want big healthy plants to keep growing and dividing only harvest a part of your crop each year and leave some to develop on for the next growing season.

The leaf shape is very distinctive and has an arrow form with the whole plant stems growing up to about 1.5-2 metres high.

They are gross feeders and respond well to lots of manure being dumped on them.

You need to be very careful when lifting them not to damage the large tubers if you want them to last in storage.

They tend to die back a bit in winter, and in cold winters can die right back to ground level.

To propagate them you just cut or break off a part of the core red rhizome and place it in the ground or pot it up. It looks a lot like a typical ginger family rhizome.

This is another plant listed in the great classic andes Research book ‘The lost crops of the Incas‘ under ‘Yacon‘. 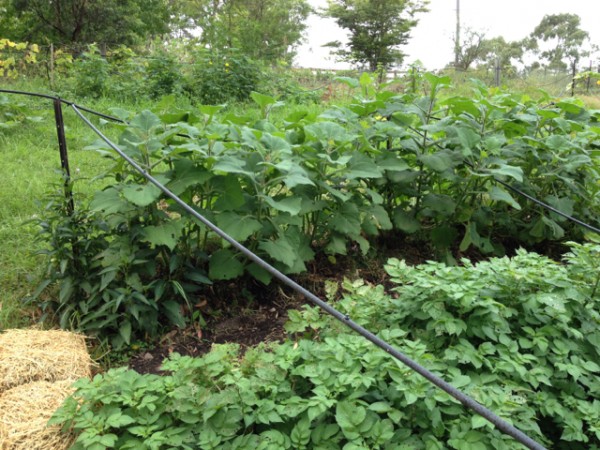 This is a row of Yacón in mid season at about 1 metre high. It is growing on a raised cultivated ridge of soil and heavily mulched with lucerne. I am growing some Pepino Dulce in between them which you can see at the end of the row and some Purple congo potatoes in the row in front. 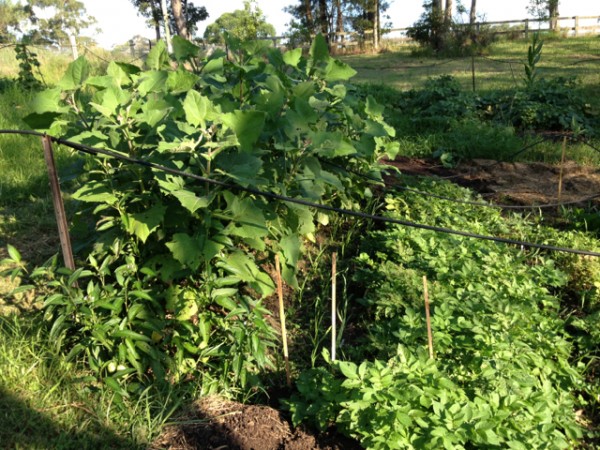 And this is about a month later.

Here’s some of those plants at harvest time in mid winter.

This is some of the rhizome after separation from the tubers. 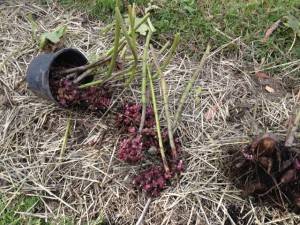 This is a single plant cluster with the tubers still attached to the main rhizome just after lifting. 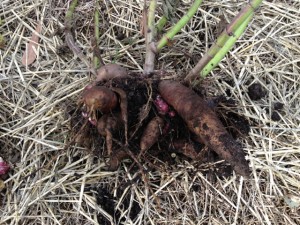