Scarlet runner beans – Phaseolus coccineus – are a short lived perennial that are often grown for a single season of production. As the name implies they climb and ramble and have beautiful red flowers that means they are an attractive plant in a garden even if you don’t like the beans.

If they grow well they form a root tuber mass that sprouts and regrows each year – if the local climate is suitable. They can sometimes be referred to as 7 year beans for this reason – as this is about the extent of the tuberous root mass life. If you want to keep them going in the same place then you need to be careful where you plant them and make sure they don’t get too wet or dry during the down time. I find they eventually adjust to your local climate and re sprout naturally in late spring.

They are one of the most ‘bean’ flavoured pods and have attractive dark red patterned dried beans as well.

The large flat bean pods themselves tend to have a downy hair like surface which makes them unattractive to some people. This surface disappears when cooked for a very short time.

The mature pod size can be also a problem as they will usually have to be sliced into segments. They can be picked smaller but tend to be sold generally at the larger more mature size I guess due to the market weight. But the fresh taste of the pods regardless of size is very nice.

The dried or mature beans – like kidney beans etc – should probably always be cooked to remove the lectins. eg. see http://www.eattheweeds.com/scarlet-runner-bean/

Even though they seem to wait for a warmer time to germinate and/or sprout they are often a problem to get to flower and produce effectively in warmer climates and it is better to plant them in late summer or autumn if your summers are warm to hot. But they will die back quickly if the temps get very low.

They are generally easy to grow and can be great ‘wasteland’ recovery plants that produce food with minimal intervention as long as they get a bit of water in the early stages of growth.

I would estimate they generally grow to about 2 metres high and wide. 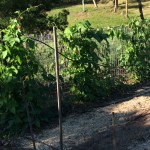 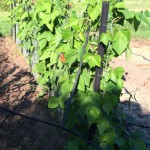 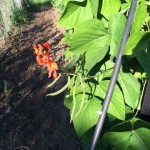 You can see some here growing on a wire trellis system in a warmer climate in autumn as they are putting on full growth and producing beans.

The beans generally grow sequentially and each flowering point will continue to produce for some weeks. This means for harvest you probably need to cut the beans off to minimise damage to the plant and keep them fruiting. One plant produces a lot of beans for a long fruiting period.

The flowers are generally a vivid red/scarlet colour but there are some very nice white and pink flowered variants that I grow as well. The beans generally have a purple/red tinge.

There is also a variety called ‘Painted Lady’ that has a white and orange/red flower and paler and browner bean which tends to have wider but less straight pods. The pods tend to be more ‘curvy’ overall. 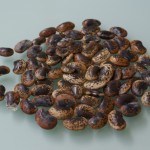 Just leave a bunch of pods on the plant at the end of the season to fully mature and dry out and you will have adequate replanting seed beans as each mature pod will usually carry about 5-6 or possibly more beans.