Purple congo is a prolific roughly shaped potato that is a dark deep purple colour with a very slight white marble. The white marble is hard to see when uncooked. The colour changes to a marbled light purple when it is cooked. It tends to be slightly on the floury side so it’s important not to over cook it, but it has a nice ‘fluffy’ potato texture and taste when simply dropped for a few minutes into boiling water – this is especially the case when it is cut into smaller shapes to add interest to your plate. It can also be added to soups, stews and casseroles to add a nice texture.

They are ideal for adding in shaped layers with other root crops or tubers for some nice visual and textural effects. Imagine a barber shop striped pole on a skewer with potato and some other nice tasting vegetable like Salsify or Hamburg parsley…mmmm tasty.

The tubers tend to grow randomly in form and can be all manner of sizes from very small marble sized units to large longer roughly sausage shapes that can also branch out. 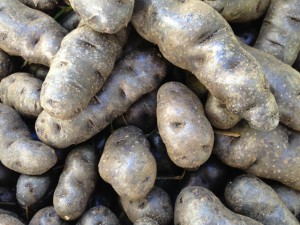 The plants them selves are quite smallish but hardy through cold weather and fairly harsh growing conditions. They grow best in a loose tilth that is open and rich and that allows them to spread and grow freely. 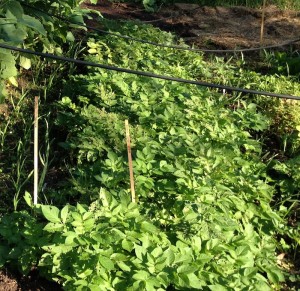 I would guess they are a just an early species ‘branch’ of Solanum tuberosum but they could even be a cross with another potato species as there are plenty of similar looking ones available in the Andes where they all originated.

Here’s a rough test I did on the current seasons (early 2013) crop. They were roughly cubed and dropped into salted boiling water for 7 minutes and lifted out to eat. Very nice texture and nice ‘potato’ taste and they retain their colour. 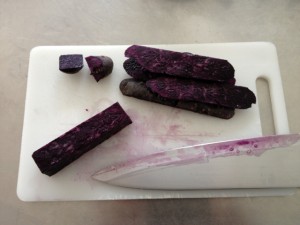 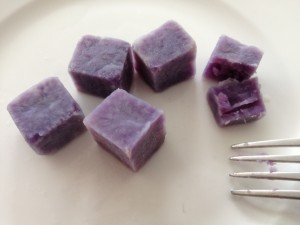 They are a very entertaining food by themselves, but you can also obviously add them to other varieties of potato when cooking to make coloured mash and gnocchi etc.

A great combo is with a bright red/pink fleshed variety or with a pure white.

The other significant purple potato I grow is Sapphire which has a better texture and range of uses but has a less dramatic colouring when cooked.