This a great producing cucurbit that is a separate species from the usual melons, squash and pumpkins that people often mistake it for.

The plant grows fast and large in a range of environments and it should be grown much more commonly than it is. It does spread quite quickly so you need a lot of space for it and it should be grown on a large trellis system or on a sturdy fence. I have found that the fruits form much better if they are lifted from the ground. It is self pollinating so you only need one vine if desired.

It is a ‘short lived’ perennial – so it will keep on going through winter if the weather permits.

The fruit is upwards of about 30cm in diameter. They can get VERY big in the right environment.

The seeds are used in a tasty ‘peanut brittle’ like dish and the central flesh is especially great used in a Catalan/spanish recipe jam – see http://en.wikipedia.org/wiki/Cabell_d’àngel

Apparently you can eat the leaves as well… but I have not been tempted tbh. 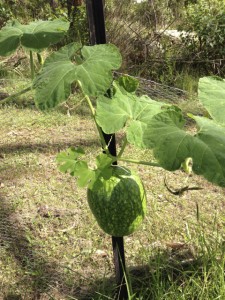 Also known in Mexico as Chilacayote and many andean countries as Zambo.

There are several variations on interesting tasty Ecuadorian recipes using Zambo and Potatoes cooked with a peanut and cream paste.

If you are looking for traditional recipes it is usually best to search for Chilacayote or Zambo.