This current crop of purple Jalapeño are just really beautiful – almost pure black. They have the same pleasant chili flavour and ‘zing’ as the green & red jalapeños but they seem to stay unmarked and have little evidence of the often typical Jalapeño skin webbing that looks like stretch marks. The small bushes stay fairly erect and fruit fairly profusely once they get going. The first fruits tend to be on the small side but seem to get bigger as the bush matures over the season. The colour has been very dark this time around right from the initial post flower stage. 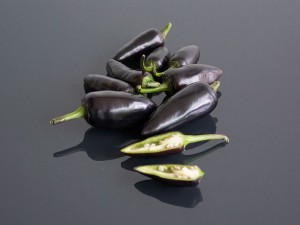 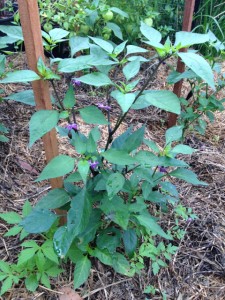 A few small bushes that are beginning to bear fruit. (The small seedlings around the base are tomatoes that are self seeding from a  previous crop.)

Corking on chill peppers is an interesting phenomena. The varieties that seem most susceptible to it also vary a lot and some like Jalapeños will have cultivars that just don’t get the marks at all. Some are very carefully bred to have little or no skin marks.

There is no clear reason why they form the small  cracks and stress lines in the skin – sometimes referred to as ‘cork’.

Some say that it can show that a pepper is ready to harvest as the skin marks start to form, although this is usually more accurately shown by a colour change. But the cork often will start to show when the peppers have at least reached their fully mature size.

Some say that the varieties with the ‘cork’ are hotter than others that have smooth skins.

I have not really noticed much difference in taste. 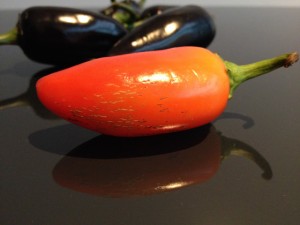 Here’s a typical ripe green/red Jalapeño with the marks.