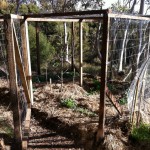 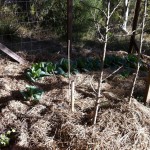 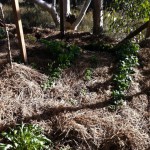 The cage planting has been reorganised somewhat to make it easier to get to and weed and tend the plants.

A strip around the inside edge has been left free along with several walking strips through the middle of the plantings to allow foot room. It was very hard to get access to anything before without standing on plants.

Part of this involved stripping out the test plantings of sprouting broccoli. They were about up to 60-70 cm high before i removed them – forgot to take shots of them… doh. but very leafy and tasty despite not very big flower heads.

Also the two dwarf Apple trees have been pruned back ready for spring sprouting.

It looks kind of minimal atm but a lot of the small seedlings are hidden by the lucerne mulch.