Its been almost a year since I reported on progress of this caged growing area on the cliffs above the Megalong valley. Production has been good and the soil has really built up well. The weather is pretty crazy but the cage contents so far have generally faired well despite the intermittent high wind and sun exposure.

There is a small ongoing population of potatoes at one end – Royal Blue, King Edward and Russet Burbank – that keep on producing year round. They get harvested regularly and are growing steadily. I picked three varieties that are very easy to tell apart visually and this is a great help when you are scrabbling around pulling a bunch of potatoes out of the ground randomly.

The two dwarfed apple trees have both produced very good tasting fruit and are finally getting to a stage where the crop and fruit size is starting to get viable.

This year there has been several successful crops of peas, snow peas, beans and cherry tomatoes. The tomatoes especially have been growing like weeds… and grown up and over the top of the cage wire.

The soil has recently been completely stripped back and turned over with a Mantis Tiller (Best power garden tool ever!) and then covered with Lucerne straw in preparation for winter. The whole cage area has a soil texture like a fine grained potting mix and there is huge worm activity.

Currently there is a large crop of Yakumo Snow peas (purple flowers with good tasting pods – Psium sativum) and a patch of Rocket (Eruca saliva) and Landcress (Barberea verna) planted into the cage and starting to grow. 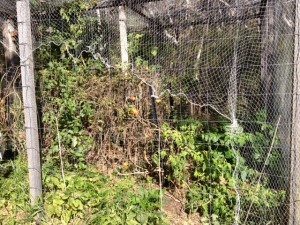 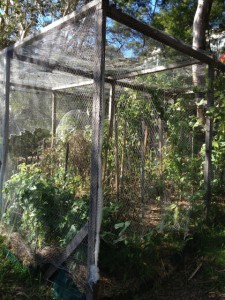