Balinese corn is a smaller paler open pollinated multi cob variety that produces a lot of green vegetative growth to about 2 metres and usually has about 2-3 cobs on each stem. They tend to be a fairly long grower till harvest but the plants are very solid and will stand up to a lot of fairly extreme variations in weather including dry times and wind. The  fairly prolific leaf matter is often used on farms for fodder as well.

Being open pollinated there is a great deal of variation but the corn cob is usually about 15-25cm long and tends to be on the pale side till fully ripe when it turns a nice yellow gold.

It initially can seem a bit bland when handling the raw cobs but as soon as it hits a hot surface like a BBG grill or hot water the flavour and smell bursts out and they can be very tasty.

It is an excellent choice if you are growing corn for subtle depth of flavour and overall corn taste rather than the super sweet F1 varieties that just explode with sugar but are too watery in my view. And It produces well in a small space unlike the larger classic Mexican and Andean varieties that need more space.

Here’s some snaps of some of this seasons Balinese corn. They generally have beautiful red tassels that dry out and turn brown when they are about to ripen. Although i have found they still need some time after this to fully pump up the kernels and colour to gold. 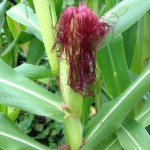 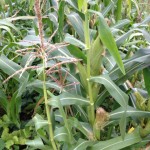 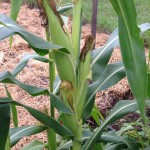 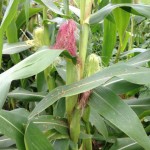 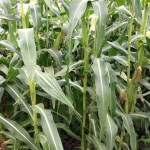 This is a pretty average sized cob for the ones i’m growing. I am tending to select the smaller more evenly ripening ones to resow. And this year was very dry with fairly extreme temperatures during the middle of the growing season. 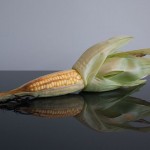 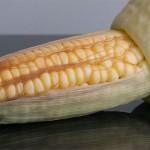 When forming they have very evenly spaced rows of kernels and are very pale or white as seen here a few weeks before harvest. You can see on this one the small growth tip that can sometimes form and continue to sprout at the end of the cob. 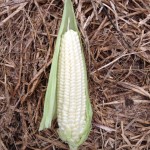 I have found that this variety in particular does a lot better when closely dual planted with legumes such as bush beans.