The asparagus bean is another tasty legume that is worth growing if you have the space and a bit of sun. They seem to like full sun and deep soil and can grow, climb and fruit profusely. I am currently growing a red variant. They are a no stress legume and don’t seem to require much attention as long as you water them regularly and they have a good tall climbing frame or fence. The taste is quite savoury and much like a full runner bean but with hints of other vegetables that are hard to describe. 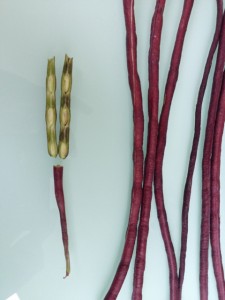 It is important that you pick and eat them as pods early and don’t leave them to develop too large as although the beans themselves stay tasty the pod becomes quite tough and unpleasant and the inside of the bean pod goes kind of squashy, papery and slimy. 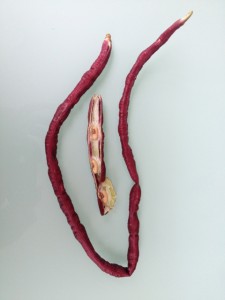 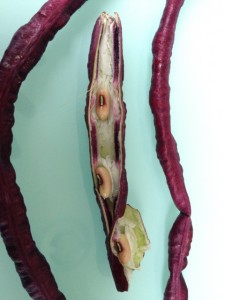 I often have seen these beans for sale at this advanced stage of growth and don’t really know why people would eat them. But when young and tender they are really very nice both raw (eg. in a salad) and also cooked.

They can get long very quickly and ones in the main pic are about 56-60cm long even though only a few mm thick. They are ideal to eat at about 30cm long and about 2mm thick.

They usually grow on small branches of two flowers/beans.

I should add here that these are the same species as Cow Peas & Blackeyed peas and are often consumed as dried beans when mature.

They have a lot of various forms and some climb extensively while others tend to be more bush like. They all produce and grow profusely once they get established for the season. They usually germinate around mid spring.

The subsp. sesquipedalis is a climber and tastes much better as a small fresh pod but the beans are perfectly ok too if they get too old and dry out.