Aji is a word that can mean a few things – one of them is the common name for the group of chill that are of the Capsicum baccatum species group that grow from the Carribean down through South America.

Aji amarillo is a nice medium heat that lingers a bit and with very complex lemon tinged fruity flavours that are hard to describe. They are really a very nice chill to work with in dishes either fresh or cooked. The baccatum group does seem to have a very complex heat.

They germinate and grow easily but slowly at first. They usually grow slowly to around 50cm-1 metre in the first year and then flower and fruit profusely in the second season. In the second season mine have also always sprouted new side stems strongly from the base area of the stem. They seem to live quite a while as bushes then taper off and die eventually – especially with wet cold periods.

One bush will produce enormous amounts of fruit.

They need staking as they tend to flop and spread out a bit as they grow. They do not seem to mind having their roots exposed a bit even though they are fairly close to the surface – so adding mulch is not a high requirement it seems.

They really do like sun and heat and will bear up very well through heat waves and severely hot weather as long as (during that heatwave) they have a good light mulch or soft absorbent soil surface and plenty of water at the root zone. 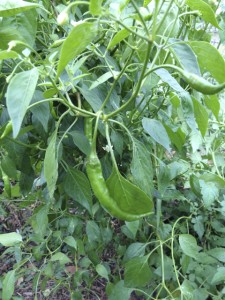 The green fruits change colour fairly slowly to a beautiful yellow/golden orange as they ripen. The flavour is way better when fully ripened even though the heat increases. 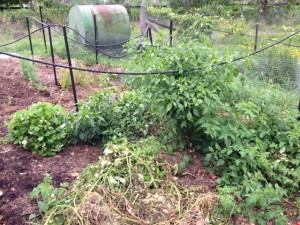 Here’s a sample bush in its second season in my small test garden plot – the aji is the taller plant to the right of centre at about 1 metre high.